This past weekend was a good one, as far as creativity goes.

I finally got everything up on the paint room walls. It looks good. I need to post pictures. The only thing I have to figure out is my shelf. I have a shelf that mounts to the wall, and I hung it only to have it come crashing down about 30 minutes after I loaded it up with all of "the stuff." None of the glass jars or other items broke or got damaged, thank goodness, but it did make a HUGE noise that scared the poop out of both Emily and I. The wall anchors were even pulled out, so I've gotta find stronger anchors. Other than that, I really like the new space and I am spending a LOT more time in there than I did when the room was downstairs, so that's a good thing.

The other thing I did was finished up some ATC's. These cards are really a lot of fun to work on. I joined a second swap that was all about flower people. Here's what I wound up with: 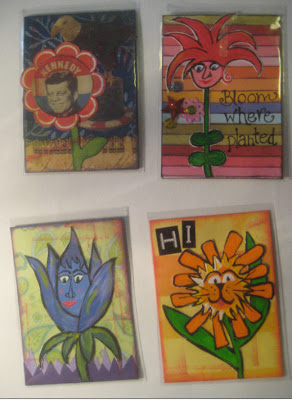 I really have to figure out how to take better pictures.

The one side effect of all this activity is that I want more of it and I want less of work. I'm really struggling with work right now as there's nothing currently happening that's really challenging me or teaching me something new. I'm a person that needs a challenge, and needs to feel that my work is producing something good in order to stay engaged. I'm not so engaged right now. And I hate it. I'm getting the work done, but I definitely don't see myself putting in 125% right now. Most days I hover between 90-100% and while I guess that's ok, I wish I felt more "into it." I've been playing around with the idea of opening an etsy shop, but I think I need to get through the first few weeks of June as it's a heavy birthday time before I start focusing on a new venture.
at 9:12 AM No comments: Links to this post

Emily is going to be 3 in June, so she is still figuring out what all of the various holidays are and what you are supposed to do on them. When we first started talking about Mother's Day, she corrected me and told her that it was "Emily's Day." Which, I guess, without her, I wouldn't be able to celebrate my own Mother's Day so I guess she sorta had a point. Anyway, we finally got her to understand that the day was a day to be nice to mommy. Given that she has 2 mommies, that's no small feat! She made/colored in our cards and gave me flowers. Her school did some cute things and overall it was a pretty low-key quiet day. One of the things I wanted of course, was breakfast. I mean, what Mom doesn't want her favorite breakfast on Mother's day. It's a chance to live a little, right?! Right!

This mom decided to take matters into her own hands to make one of my favorite things - cinnamon rolls. I have only made from-scratch cinnamon rolls once and that was when I was little. I was visiting my grandma's house, and my Aunt Wendy was there (which is worth remembering in itself as I didn't see my Aunt Wendy too much growing up). My Aunt gathered me up and we headed into my grandma's delightfully sunny, yellow kitchen and she showed me how to make cinnamon rolls and sticky buns. I remember the process took a LOONG time, but the wait was totally worth it. I still remember kneading the dough, waiting, waiting, waiting, waiting for it to rise and the wonderful golden color when they came out of the oven. I couldn't have been more than 11. As an adult I've thought about making cinnamon rolls so many times, but I call up this experience and it just seemed so labor intensive, that I've always just settled for the pop-out-of-a-can variety. As Mother's Day approached this year, I thought that it would be a perfect time to try to make these again.

After not finding a recipe that caught my eye a few months ago, I settled for Paula Deen's cinnamon roll recipe. I mean, Paula is southern and for things that should be gooey and yummy and delicious, Paula is a no brainer. I used the recipe here, and made a few adjustments. First, I used my Kitchenaid mixer to mix, so kneading wasn't required. I used only half of the butter she called for when brushing the rolled dough with butter. I also used less white sugar and added about 1/3 cup brown sugar to the filling. I also used pecans in my filling. When it came time to frost the rolls, I found that I didn't need as much as the recipe made - I probably drizzled half of it over the finished rolls, but other than that I followed the recipe to a tee, and these were the most perfect, wonderful cinnamon rolls. The process is long, but it wasn't as hard as I remember and I will likely make these again, but split the time up by starting a day before I plan on serving so that it doesn't take 3 hours in the morning to make.
at 9:13 AM No comments: Links to this post

Email ThisBlogThis!Share to TwitterShare to FacebookShare to Pinterest
Tags: baking

I took last Friday off for a personal day. Literally. Friday was all about me. I got up, I made coffee and I went into the paint room and didn't come out for most of the day.

I made 3 Artist Trading Cards, and I had SO much fun doing this. I joined a swap that was centered around "ransom notes" and you simply had to use words with ransom-type letters in the card. My pictures are really bad (I really need to learn how to photograph art), but here are the first three: 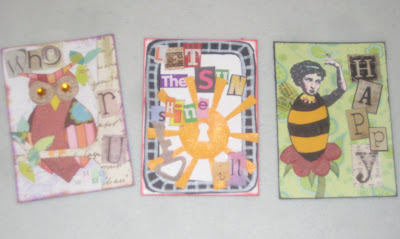 I need to swing by Hobby Lobby to see if they have individual plastic sleeves so I can send these out. I joined a second swap called "Flower People" and I've drawn out 5 of the 6 cards I need, but this one just sorta popped out last night: 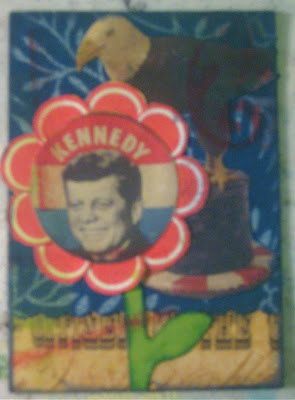 (That picture is really bad, but sadly it was the best of the bunch that I took.)

I didn't even seem to think about it too much - I just had fun with my supplies and went for it. These cards are a lot of fun, and I'm really excited for the actual trading part and to see the work of other people.
at 8:41 AM No comments: Links to this post

I've been intrigued by Artist Trading Cards (ATC) for awhile now. Yesterday I somehow stumble across ATCsforALL.com which is a site dedicated to ATC's. I poked around a bit and decided to sign up. I also put my hat in the ring for a trade that is focused on ransom-note designs. I need to do 3 cards in the next few weeks. I've had fun brainstorming this since last night. Looking forward to see how my work turns out and even more excited about the trade!
at 11:54 AM No comments: Links to this post

I think I have a pox on me. A cake pox, to be specific.

Growing up, my family baked. Not every day, but cookies, cakes, brownies - they were all apart of the fabric of my house. My sister grew to be the family's official baker. Despite my best efforts, I could only master cookies and brownies. Cakes always failed me. It's so sad. I even had trouble with boxed cakes. I don't know what it is, but I can literally count all of the successful cakes I've made on one hand.

Yesterday the pox struck again. Last week, pound cake recipes were hitting me from every corner of the interweb. I don't know what it was - but everywhere I turned was a lovely yellow cake - some topped with berries, others with frosting, but they all looked delicious. Have I mentioned that I love pound cake? So yesterday, I decided to try Paula Deen's Grandmothers Sour Cream Pound Cake. I mixed it all up, dug out my bundt cake pan and loaded the batter into the oven. At 45 minutes, I check it. It was beautiful - turning golden brown on top, it had risen above the pan just enough to make the removal of it easy. About that time, Heather started making pizza for dinner. The dough was rising and one of the pizzas was going to be bbq chicken. So after resetting my timer, I left the kitchen to let Heather cook the chicken. I came back 20 or so minutes later after the chicken was done, and noticed that the front burner was still on. I turned it off and checked my cake. It was still jiggly. Weird - it should be just about done. I set the timer for 5 more minutes. 5 minutes later, same thing. 10 more minutes went on the timer and 10 minutes later when I checked on the cake I noticed that it was starting to fall. Weird. Heather was getting close to being ready for the oven (we had timed the pizza and cake to coincide), so I set the timer for 5 more minutes. As the timer was beeping for the last time, I reached to turn it off and noticed that the oven had been turned off. I then opened the oven. The cake had completely fallen and it was still wet in parts. I was so sad. It smelled wonderful and the color was perfect. After it cooled, I naturally picked through the parts that were done to give it a taste. OMG - so moist and rich! It would have been so good with the strawberries I had cut up and the whipped cream we were planning on making later that night. I made sure everyone got a little taste of the cooked part so they could tell me how wonderful it would have been. Heather ran by the store and picked up a store made angel food cake, which is just not the same when you are all set for pound cake, so I passed on the strawberry shortcake and instead just picked out a few strawberries.

I really want to try this recipe or another pound cake, but I'm afraid the pox will somehow find a way to strike again.
at 8:41 AM No comments: Links to this post